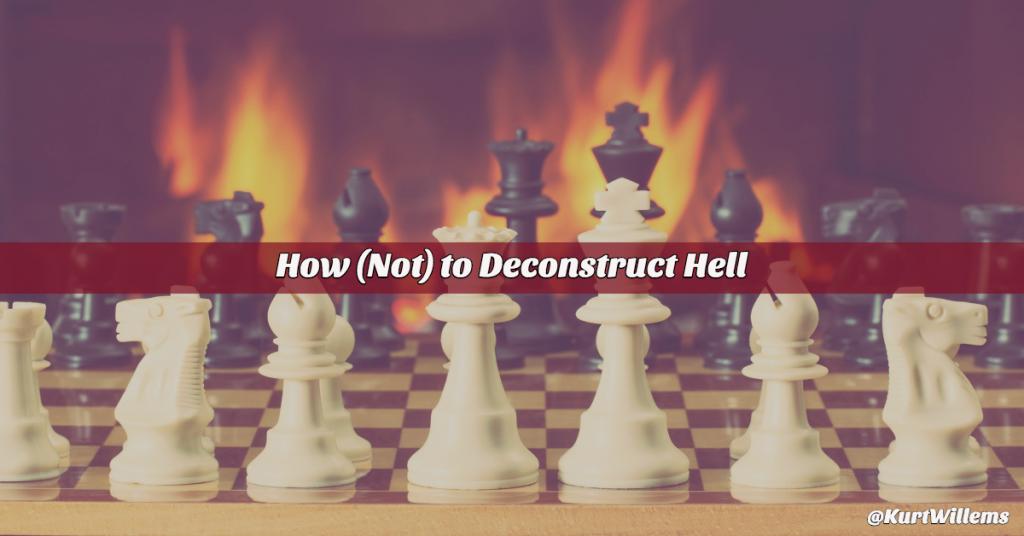 As I often do, I find myself circling back to a subject that has been a matter of deconstruction in the past:

Yep, H-E-Double-Hockey… it is an an issue that many of us continue to wrestle with.

Now, there are two approaches to deconstructing hell.

First, you might find yourself saying: “I can’t believe in a God like that, who would send billions of people to hell for eternity.”

If this is you, I get the impulse. However, many people often allow that impulse to lead them to disregard the Bible. Such a person stays a Christian for part of this season. Then, eventually they may say: “If I’m no longer believing what the Bible teaches here, why do I believe the Bible at all?”

For this first approach to deconstructing hell, the natural result can be that a person deconstructs out of faith altogether. Not always, but often this is the case. Surely this is a simple example that needs some flesh and bone, but hopefully the basic point is made.

The second approach has been my own, and many others who grew up with a traditional view of hell (that it is eternal conscious torment), might say: “I can’t believe that the Bible doesn’t teach eternal conscious torment… thank God there are other sound theological options!” In other words, whereas the first approach starts and ends in mostly in experience, this latter approach starts with the Bible (informed by experience and exegetical resources) and ends with the Bible.

In fact, finding alternative views of hell that are more biblically sound than the so-called “traditional view,” has made my faith stronger.

Not only am I more passionate, than ever, about reading Scripture; I’m more in love with the God—Jesus himself—that I find in its pages.

Let me share a great quote from N.T. Wright about hell in its historical context.

He articulates that impending destruction of the City of Jerusalem (by the Romans in 70 CE) is what Jesus’ Gehenna (the main word we have in Greek for “hell”) warnings have in view, and it is “only by extension, and with difficulty, that we can extrapolate from the many gospel sayings which articulate this urgent, immediate warning to the deeper question of a warning about what may happen after death itself.”* He adds:

Unless they turned back from their hopeless and rebellious dreams of establishing God’s kingdom in their own terms, not least through armed revolt against Rome, then the Roman juggernaut would do what large, greedy and ruthless empires have always done to smaller countries (not least in the Middle East) who resources they covet or whose strategic location they are anxious to guard. Rome would turn Jerusalem into a hideous, stinking extension of its own smoldering rubbish heap. When Jesus said ‘unless you repent, you will all likewise perish’, that is the primary meaning he had in mind…. [H]e was not concerned to give any fresh instruction on post-mortem judgment, apart from the strange hints that it was going to be dramatically and horribly anticipated in one particular way, in space-time history, within a generation (176-177).

For more reflections about hell, here’s what I’ve written in the past.

*N.T. Wright, Surprised by Hope: Rethinking Heaven, the Resurrection, and the Mission of the Church (New York: HarperOne, 2008), 176.