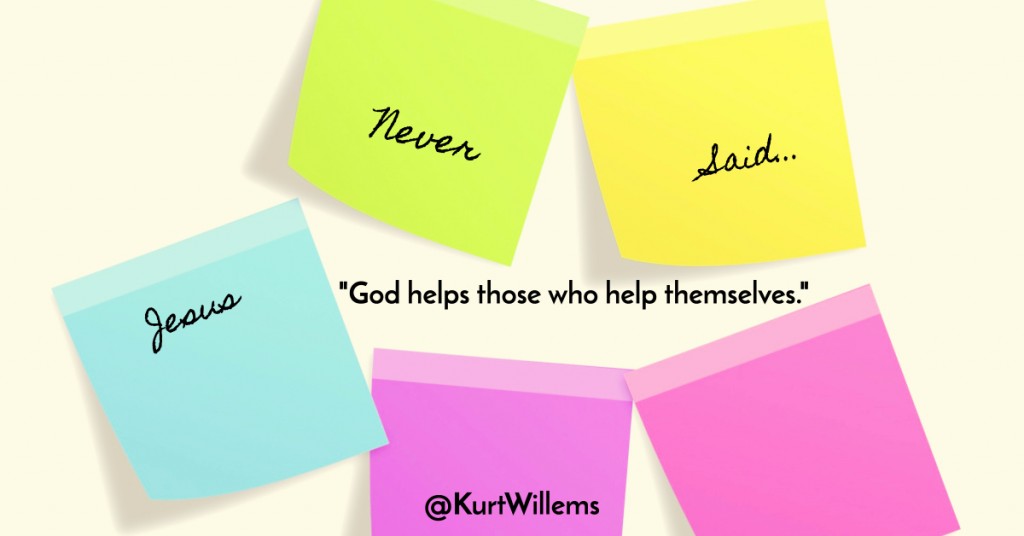 Perhaps you’ve heard the catchphrase: “God helps those who help themselves.”

It might have come up at a dinner table during the election.
In our day, this phrase comes up in political banter more than any other place.

One side claims that Jesus gives everyone a fair go at life, so all you have to do is work hard to succeed. At one level I agree: we should strive to be personally responsible where we can be.

The other side appeals to all of the passages about feeding the hungry, and says that this phrase certainly doesn’t mean that we leave people to their own difficult circumstances.

(For my friends who aren’t American, this probably doesn’t apply, but feel free to chuckle at us from a distance ;-))

Where both sides are often wrong, I think at least, is in the assumption that this is even a helpful or “Christian” saying at all.

Sadly, one stat I came across from the 90s (so old, admittedly) states that about 68% of US Christians believed that “The Bible teaches that God helps those who helps themselves” is true. The number was higher for Americans in general.

Not only is this slogan unhelpful but it is not in the Bible at all.

It’s nowhere to be found.

It has its origins about 400 years prior to Jesus in Aesop’s Fables, in the story of Hercules and the Wagoner.

The wagoner’s heavy load leads him to distress because he gets stuck in the mud.
If you’ve ever been stuck in the mud (don’t read ‘stick in the mud’ although maybe this is true at times too for some of us :-)), you know that things can get really bad really fast.

So the wagoner cries out to Hercules for help. The demigod Hercules (Heracles to the Greeks) replies:

“Get up and put your shoulder to the wheel. The gods help them that help themselves.”

Where does this infamous one liner come from: not Jesus, nor the Scriptures.

It comes from Greco-Roman myth.

Nothing about it is Jewish or Christian.
But after Benjamin Franklin used this slogan in his publication of Poor Richard’s Almanac, it has become part of the American ethos ever since.

Thus, many people believe it to be in the Bible or based on something from the Bible.

I’d argue, it is actually anti-Bible.

This idea can easily lead to a poor assumption: my actions determine my access.

Let me say that again.

The false idea that “God helps them who help themselves” leads to the false narrative that our actions determine our access to God.

Nothing could be further from the truth!

Rather, our access to God (relationally, experiencially, etc.) can and should determine our actions (rooted in God-like love and empathy toward others).

Accessing God is so different for those of us to see Jesus revealed in the New Testament. The gates are as wide as we let them be! God wants nothing more than to be accessible to all.

This is why, in the Scriptures, the initiative for all that is good always starts and ends with God, not us.

God always takes initiative. Whether it is calling Abram to be the father of a people who would partner with God to undo the evil of Genesis 3-11, or forsaking the glories of the heavenly realm of reality to become human in Jesus of Nazareth: God is the initiator.

God doesn’t wait around hoping we will make the first move to ‘help ourselves.’
God is already acting in the world to our good end.

Everything that is good, starts and ends in God. Our cooperation flows from our access and experience of God, not to earn access to God.

Add to this that “God helps those who help themselves” is the language of privilege.

If God is into impartiality, then this slogan is junk already.

God is so impartial that Jesus says that we are to love even enemies! God sees our enemies as people to be loved! God sends rain on both the righteous and the unrighteous (see Matthew 5.44-45).

God isn’t partial to those who pick themselves up by the bootstraps to “help themselves” first. Neither should we adopt this posture!

God’s love extends father than our logic or cliches will ever know!

When we are tempted to grab for quick answers and slogans that will reinforce our particular positions on an issue, we need to ask: Does this look like the God who looks like Jesus?

In this case, the slogan doesn’t pan out.

In fact, there was once a man who was pretty well off in life who approached Jesus (see Mark 10.17-22).
He wanted to know what he needed to do to inherit the life of the Kingdom that Jesus came to proclaim.

The conversation first turned to the 10 Commandments.

Sure Jesus: I’ve never stolen anything. I never killed another person. I tell the truth about others. I’m good to my parents.

Of course, Jesus is glad to hear that this wealthy young man lived out the Torah commands so well.
But even in appealing to the commandments first, we see that this person had the wrong narrative:

For him, it seems, his actions (what he had accomplished) should lead to greater access (an inheritance in God’s kingdom).

Jesus tells him to sell all his stuff (because it is getting in the way of truly seeing how wide the access point really is!) and to follow him (the embodiment of “access”).

Basically, it’s like Jesus is saying: Come and see just how wide and beautiful the access to God really is… follow me to it… that’s how you will see the kingdom for what it truly is. It is all grace. You are in unless you opt out.

Sadly, this young man can’t do it. He gives us an example of someone who at some level believed that “God helps those who help themselves.” He was mistaken.

He had all the money he would ever need. He had all of the rules followed.

But he lacked one thing: experiencing the gift of recklessly following Jesus into the deep love of God that opens our eyes to others around us.

And may you see that empathy for others and reliance on God is born out of a life surrendered to the love of God!

***Some of the historical insights come from Adam Hamilton in Half-Truths.