Each year Christmas comes along and so do various controversies. Yesterday, my friend Jeff Clarke wrote:

Instead of pointing people to the humble birth of the incarnate God, we point out how angry we are that people have forgotten the reason for the season.

Through a variety of ways and means, we sometimes use power and ridicule in our attempts to force people to recognize Jesus, rather than take up Jesus’ weapons of choice – powerlessness and respect.

Before we paste the latest poster on Facebook that seeks to force Christ unto our friends, please take a moment to stop, reflect and consider other options.

We are stuck in the midst of a culture war, fueled by social media and cable news. A few issues clearly need to be addressed:

The first thing we need to recognize is that to say “happy holidays” isn’t anti-Christian. How dare we be the sort of people that love our neighbors by not imposing our Christ-Mass holy day onto their December agenda!

And perhaps some might say that true love is actually making sure that Christian views are front and center. Here the intent is good, but the assumptions behind the intent are wrong. Only if one believes that America is a Christian Nation does this sort of war of words make sense.

Clearly, this is a pluralistic culture and we need not coerce Jesus to the center of the public square. This actually makes God less appealing than more. In this “war” we turn people away from the love of God, not toward it.

The Commercialization of Christmas

Then, of course, we have the controversy over the commercialization of Christmas within popular culture and the full-fledged embrace of it by some Christians.

Some of us spend more on Christmas than we do on the poor throughout the rest of the year.

Some of us talk more about Santa than the incarnation. I’m certainly not against the giving of gifts or the Santa story; both can be fun ways to celebrate. The point I’m making is that the church has a deeper point during the beginning of the Church Year: to begin the journey to the manger that transformed the world.

No matter what American culture, or any culture, holds on to as traditional celebratory activities during Advent, we must not neglect the Great Tradition: the beautiful reality that God became human for the redemption of all created reality.

This second area of controversy, the commercialization of Christmas, ought to push Christians to consider this question: What are we Christians ‘selling’ this Christmas?

Are we selling a festive few weeks with jolly ol’ Saint Nick or are we donating lives that reflect the humility of God in a stable?

Are we selling a season where we need to get our way with the display of nativity scenes in governmental places and the jargon of “Merry Christmas,” or are we donating ourselves to our neighbors by humbly honoring them with “Happy Holidays” as we seek to live out the way of Jesus?

If we sell a Jesus who demands to be the center of popular culture, then we fail to remember that Christ came to us from Bethlehem, not Rome. Had Christ wanted to fight the culture wars he would have positioned himself in the center of the “pagan” world, the capital of the Roman Empire.

Instead, he didn’t demand the central place in culture, but humbly “emptied himself” (Phil. 2). Or as the Message puts it: “When the time came, he set aside the privileges of deity and took on the status of a slave, became human!” 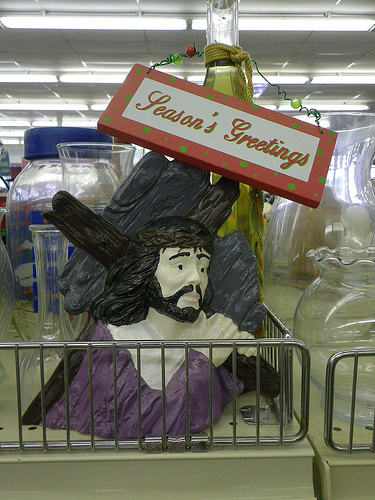 Certainly, Jesus will be the center of all cultures eventually, for a day is coming when “every knee will bow and every tongue will confess that Jesus Christ is Lord” (Phil. 2). But notice the pattern: Jesus first “emptied himself” (donated himself). Had he not demonstrated this pattern of identifying first with the margins of Bethlehem, his Apostles (Peter and Paul) wouldn’t have been such revolutionary voices in the context of Rome–when the message finally did make it out there.

Jesus reminds us that donating our lives from the margins of culture is where we will most effectively make and impact for the upside-down kingdom of God. The moment we try to “sell Christmas” to culture, or rather, coerce Christmas (our holy version of Christ-Mass) back into the center of public discourse, we’ve failed to model our witness after Christ.

The best thing we can do during the Holidays is to choose to lose the “war for Christmas,” so that we don’t fail to show our culture Jesus.

Maybe then we will become known as people who donate ourselves to others and give up any aspirations of “selling” Christmas to popular culture. This not only looks more like the emptied God, but perhaps some of those who don’t know the Christ of Christ-Mass will earnestly seek him from afar, not unlike the Magi of the first Christmas.